For the first time members of the CSE Forces Entertainment team have been awarded operational service medals for their contributions to forces shows in Iraq and Afghanistan. 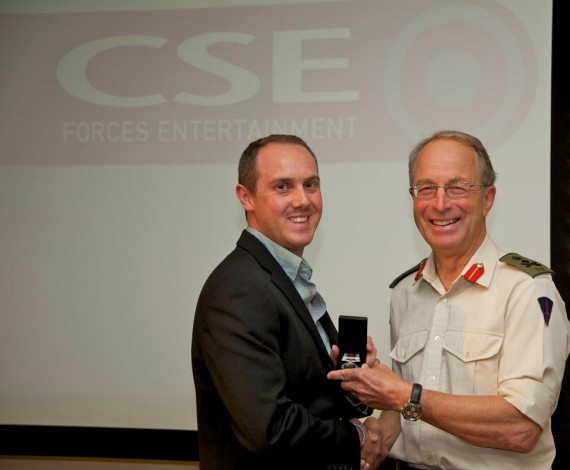 Chief of the Defence Staff, General Sir David Richards, presented 13 individuals with the medals at the Victory Services Club in London.

He said: "what CSE do for our people is very important indeed. I wanted to come along to make sure that they genuinely understand that I mean it because they are brave and raise morale - all things that we ought to honour and applaud. If morale is not high soldiers, sailors and airmen just won't go the extra mile."

Though CSE delivers 400 show days a year across the forces world, the staff have never received medals for their work in operational areas. But due to a recent change to the rules, those who have accumulated 45 days of service while deployed now qualify for the award.

Since STL were bought in by Capital Productions to supply lighting services for the CSE shows back in 2009, Phil has completed four tours of Afghanistan going out as both a technician and lighting designer.

Working in such challenging conditions and climates means that the equipment has to be carefully selected and well maintained to ensure it doesn't start to fail in the phenomenal desert heat. Phil was very keen to put himself forward for the Afghanistan shows to deal with any breakdowns and make sure everything remains serviceable throughout the tour.

Capital Sounds Charles Ellery who co-ordinates the supply of equipment for the CSE shows and has now completed 19 tours of Afghanistan, as well as deployment to Iraq, was eligible for an operational medal for each country.